The nervous system is the master controller of all living cells, tissues and organs; Orchestrating and coordinating all cellular functions. The spinal column encases the Nervous System (spinal cord and nerve roots) and is responsible for its protection.

Because of the unique intimate relationship, biochemical and structural problems in the spinal column can irritate parts of the enclosed Nervous System. This irritation can result from noxious inflammatory biochemicals released during tissue injury or may result from direct mechanical pressure. In either case, the functioning of the Nervous System is compromised and negatively influenced as is the functioning of the cells, tissues and organs which are supplied by the affected nerve or nerves.

The resulting ailment depends on the cells, tissues and organs affected by the subluxation as well as the extent of the Nervous System compromise.

Basically, the body’s innate intelligence and recuperative powers are affected by and integrated through the Nervous System, correcting Spinal Abnormalities which irritate the Nervous System can lead to a number of favorable results in patients suffering from various, seemingly non spinal health conditions.

Chiropractic patients typically come to the office initially with a compromise that has caused a symptom or pain. The chiropractic profession will aid in the relief of those symptoms to restore optimum health expression.

The importance of maintaining a healthy spine is paramount and just as important as brushing our teeth. 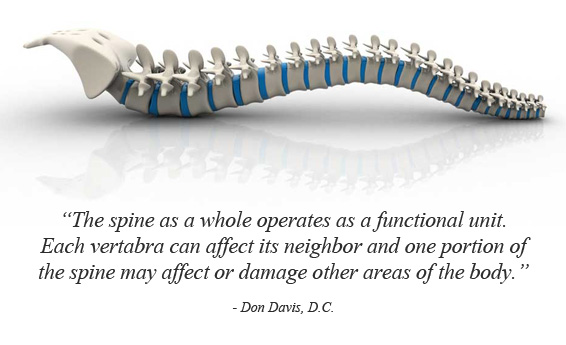